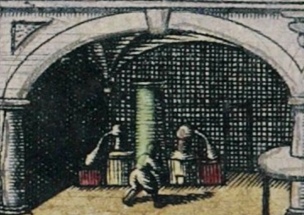 In order to study alchemy in the Middle Ages and early modern period, one typically had to do so in secrecy or would not openly conduct experiments unless something revolutionary was discovered.  Even Galileo performed some alchemy experiments, however, it was kept a secret, and his experiments are still not widely known.  Alchemy is seen as the precursor to modern-day chemistry, and there were several different areas of study in alchemy which could be applied to daily life.  One of these subdivisions of alchemy has some commonalities with pharmacology or organic chemistry.  It was used to make medicines or remedies to treat illnesses in pre-modern times.  Tycho Brahe had his own alchemical laboratory in his observatory on his own island, Hven, just off the coast of mainland Denmark.  On this island, there were two main observatories, Uraniborg and Stjerneborg, where he made countless astronomical observations.  The island that these two observatories were on was Brahe’s laboratory, and he could study what he saw fit.  He had different buildings where he could conduct experiments in subjects such as astronomy, mathematics, and, possibly the most elusive and controversial, alchemy.  Tycho Brahe’s alchemy was heavily influenced by Paracelsus, and his work included aspects of remedies and celestial bodies.  Tycho Brahe also had several different people work in his alchemy lab, a couple of whom were women.  This was uncommon for the time, but Brahe had a limited population to work with on his island, so he was able to have his sister and others work alongside him.  Alchemy was seen as a mysterious and precarious science, and Tycho Brahe’s experiments in his lab were no exception to this.

Alchemy came to medieval Europe by way of translation from the works of many other scientists, most notably the Muslim alchemists.  It was considered common knowledge that all matter was just some form of a universal substance, the prima materia (Gordon).  Paracelsus explained the universe as run by an unknown and likely unknowable set of forces.  There was a link between the cycles of the heavens and the changes of earthly life.  There must be some sort of relationship between the fates of humanity and the positions of the planets (Thoren).  One of the main focuses of alchemy aimed to purify or transform certain metals and compounds, while another division was focused on making medicines.  While some people practice alchemy today, their goal is not to transform certain metals, such as lead into gold, but rather a more philosophical field.

Around the 18th century, chemistry and modern medicine began to take over alchemy, as mechanisms for converting compounds became more well understood.  There was also lost support that purified precious metals could be produced from more common, less valuable ones.  However, there were some well-known scientists who practiced alchemy, such as Isaac Newton and Tycho Brahe.  Newton’s studies of alchemy were not widely known or publicized, but he did have many manuscripts and reports about his experiments which are currently being studied.  Tycho Brahe’s work in alchemy is also largely a mystery, as his laboratory and writings have not survived, and much of what is known has been extrapolated from piecing his work together.  Alchemy was somewhat of a secretive science, and, in order to find patrons, many alchemists would break the unwritten rule of indirect access to wealthy patrons by directly approaching them.  They would demonstrate their knowledge and skills in the field in hopes of gaining support and funds (Nummedal).  Alchemy was still not perfected, so the better a person was at experiments, the better patron they could work for, which means better equipment to improve their skills. 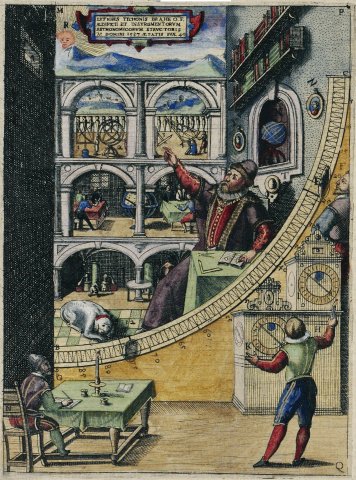 Mural quadrant, from Tycho Brahe Astronomiae instauratae mechanica (Wandsbeck, 1598). The image shows the three levels of Uraniborg: observatory on top, library in the middle, and alchemical laboratory in the basement.

King Frederick II of Denmark gave Tycho Brahe his own island and money to conduct studies in subjects such as astronomy, mathematics, and botany.  According to Zacharias Brendel, Tycho Brahe was the “restorer of astronomy,” and Brendel realized this could also be used in the field of alchemy (Moran).  Tycho Brahe also provided horoscopes for the king and his children, but less well known are his laboratories, as they have not held up to the elements or were destroyed shortly after his death.  The entire observatory of Uraniborg was custom built according to Brahe’s specifications (Nummedal).  His basement alchemical laboratory had sixteen furnaces in it, among other pieces of equipment which he could use for such things as distillations and purifications (Thoren).  This laboratory was built in the basement to allow for easy deliveries of fuel to supply all of his furnaces and was not in the way of his astronomy observatory (Nummedal).  Even though Tycho Brahe was very interested in astronomy, his elaborate plans for an alchemy lab show that he must have had a great interest in alchemy.  He also had a winter kitchen which housed five more furnaces that he could use to cut down the time he took to check on major projects (Thoren).  While most of Brahe’s experiments and results were not written about, there are some accounts of those who did work in his laboratory.  There are some accounts of his sister, Sophie Brahe, working there (Christianson, Thoren), but there were also two others, Flemløse and Gellius, who are presumed to have made the largest contributions to Brahe’s work (Thoren).  Brahe kept his work in alchemy mostly a secret, quite opposite to his discoveries in astronomy, but accounts from those who worked in his lab have helped to discover what was achieved in his lab. 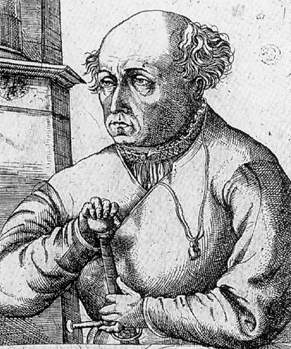 While alchemy is commonly known as a search for a mechanism to transform some materials into pure and rare elements, there was also the Paracelsian side of alchemy.  This could be equated to an early form of organic chemistry focusing on discovering and creating remedies to help those who are sick or to prevent illnesses from happening.  During the sixteenth century, many alchemists realized that transmutations were futile and the main focus on alchemy was more Paracelsian.  Paracelsus believed that every aspect of the natural world was connected in ways by substances with chemical bases (Thoren).  Tycho Brahe was fascinated with this side of alchemy.  According to Jole Shackelford, alchemy was second only to astronomy in the eyes of Tycho Brahe.  Alchemy was extremely important to Tycho Brahe and his island works, but he did keep them secret.  He believed that alchemy was proprietary knowledge that should only be shared with patrons.  The knowledge that he gained was to be a gift to his patrons, not common knowledge that everyone should be aware of.  His island allowed him to limit public access.  Those who were willing to come to Uraniborg could have Brahe’s alchemical knowledge shared with them (Nummedal).

While Tycho Brahe kept his alchemy shrouded in a veil of secrecy, with no written accounts of any of his recipes or experiments (Thoren), there is evidence that his work was known in Denmark.  Even though his focus was on the medicinal side of alchemy, he did not actually make many compounds.  This did not stop others from coming to visit him, as one of his remedies was thought to be the cure for everything.  It was an elixir that was highly regarded, and Brahe’s diaries included many entries about deaths from patients who came to him looking for a cure.  A couple of his recipes even made it to mainland Denmark through patients who were healed.  Some of these recipes circulated in the Danish Pharmacopea (Thoren).  Even though Tycho Brahe saw his work as private knowledge and only readily available, he still realized that, as using his alchemy as more of a search for medicine, his advances would ultimately become relatively well-known in Denmark.

Few people had access to Tycho Brahe’s alchemy lab, but those who did were either notable scientists, went on to be scientists, or were deeply intrigued with science.  Tycho Brahe’s sister, Sophie Brahe, performed many experiments at Uraniborg (Christianson).  She was mostly focused on horoscope astrology while working on Hven, but she did some work on medicinal alchemy (Thoren).  She was engaged to and eventually married Erik Lange, who also worked in Tycho’s alchemy lab.  While he was there, he found a way to multiply flour four times.  Tycho Brahe was extremely impressed with this, and saw it as more important than converting common metals into gold (Thoren).  One of Tycho Brahe’s primary focuses was on the practical and beneficial results that could be applied to the common population, so he saw this as a great advancement.  He was also concerned with the Paracelsian medical research.  Two others who were in the alchemy lab were Flemløse and Gellius.  They were highly regarded by Tycho, and they spent considerable time in the lab.  Tycho described Flemløse as very skilled in pyronomics and astronomy who came to Hven because of the relevance of astronomy to medicine.  When he died, he was about to obtain a medical degree from the University of Basal.  Gellius spent several years at Hven, and he later became a professor of medicine at the University of Copenhagen (Thoren).  These two had a true interest in medical endeavors, and they were major contributors to Tycho Brahe’s alchemical advancements, even if they were kept as secret as possible.

Tycho Brahe’s island of Hven, which was home to his observatory, also housed a very secret alchemy laboratory.  Alchemy was a very mysterious science, and some were focused on gaining riches and personal gain, however futile that may have been.  Tycho Brahe, on the other hand, was focused on Paracelsian alchemy.  He took advantage of his ability to custom build an observatory with a massive alchemy lab, and he had some of the top scientists working to create medical advancements on Hven.  Sophie, his sister, Erik Lange, Flemløse, and Gellius were four of the most well documented scientists in Tycho’s lab.  They made advancements in medicine, and in one case, increasing a stock of flour.  These discoveries helped change the field of alchemy to make it more focused on medicine and practical advancements.  Tycho Brahe’s secrecy in alchemy has kept many of his discoveries unknown, although there are only a couple accounts of him actually completing a successful experiment.  Most of his work was only available to patrons and those who were willing to journey to his island, such as extremely sick patients, many of who did not benefit.  There were some that were healed, and they brought back his remedies to Denmark and made them public.  There are no accounts written by Tycho Brahe of his compounds, but there is enough evidence to come to conclusions on his impact in the field of alchemy.  Not much has survived since he has died and his observatory was left to ruin, but his work in early medicine was significant nonetheless.

Thoren, Victor E., and J. R. Christianson. The Lord of Uraniborg: a biography of Tycho Brahe. Cambridge: Cambridge U Press, 2006.