In the fifteenth and sixteenth centuries, as Europeans began traveling to parts of the world they had never been to before, they encountered natural phenomena and natural objects that they had never seen or heard of before. They saw stars that they hadn’t been able to see, plants and animals that were utterly different from anything they were familiar with, and experienced climates and weather phenomena that were strange and often dangerous. They also, of course, encountered people. Very few of the lands “discovered” by Europeans were actually uninhabited. The indigenous peoples Europeans came in contact with had their own ways of understanding, explaining and exploiting the natural world around them. By “exploiting” nature, I simply mean: “using” the natural world in various ways. These ways could range from the basic (e.g. which plants are good to eat and which are poisonous) to highly sophisticated (e.g. how to create multi-year calendars based on observations of the heavens and how to construct elaborate irrigation systems). Much of what Europeans learned about the “new” environments they entered was mediated through their contacts with the people who had lived in these environments for generations. Europeans came into contact with indigenous knowledge, but also with indigenous knowledge systems. By “indigenous knowledge,” I mean specific information about local environmental conditions. For example, knowing that a particular plant cures a particular illness is a form of indigenous knowledge. By “indigenous knowledge systems,” I mean the larger theoretical frameworks into which particular facts fit. For example, knowing why a particular plant cures a particular illness implies a broader knowledge system into which this particular fact fits. Europeans tended to be far more interested in indigenous knowledge than in indigenous knowledge systems. They were prone to take pieces of information from local informants and try to put them into their own theoretical frameworks. And because today most of the written records available to historians are those that were composed by Europeans, it is often difficult or impossible to reconstruct the knowledge systems that this information once fit into. In what follows, I give three specific examples of different kinds of encounters between Europeans and indigenous peoples, and different kinds of knowledge exchanges. I’m going to focus on “New World” encounters, that is, encounters with the nature and peoples of North and South America and the Caribbean. This account could certainly be extended to include Africa and China, as well as Greenland and Iceland (we may think of these last two as “European,” but in the early modern period they were definitely “foreign” and “exotic” to most Europeans).

My first and earliest example comes from Antonio Barrera-Osorio’s Experiencing Nature: The Spanish American Empire and the Early Scientific Revolution (cited below). 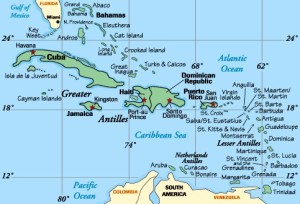 Barrera-Osorio provides some tantalizing examples of interactions between Spaniards and indigenous peoples. One of the most striking is the story of a Spaniard named Antonio de Villasante, who moved to Santo Domingo (now the capital of the Dominican Republic) and married a local Taino woman referred to in Spanish sources as Catalina de Ayahibex. (The Taino were the indigenous peoples of the Caribbean.) Villasante described his wife as a “cacica,” a Spanish word derived from the Taino term for chief or leader, and as a converted Christian. (The Taino are known to have had both male and female chiefs.) In 1528, Villasante reported to the Spanish crown about several medicinal plants indigenous to Santo Domingo. He had learned of the properties and uses of these plants from his wife and in-laws. He reported that he had personally conducted experiments on these plants and he sent samples to physicians back in Spain, who in turn performed their own experiments on the healing powers of these New World plants. The Spanish monarch supported such experimental work because if the plants turned out to be useful they would be valuable commodities. This story of a scientific collaboration between a Spanish colonist and a Taino chief is particularly poignant, because by the end of the sixteenth century the Taino people were virtually wiped out. But the story also illustrates the ways in which an experimental approach to nature developed and flourished in the context of European desire for commercial gain and contact with indigenous people

My second example is a book: the Codex de la Cruz Badiano. This is an herbal – a book about plants and their medicinal uses – written in Mexico in 1552, and sent to the Spanish monarch King Phillip II. It is a manuscript (the Codex was not printed until the 20th century). The Codex is a relatively rare example of a book written by a native Mexican. Its author was Martín de la Cruz, an “Indian” doctor. He wrote or dictated the book in Nahuatl, and it was translated into Latin (so that it could be read in Spain) by another native Mexican, Juan Badiano. De la Cruz and Badiano were both affiliated with the College of Santa Cruz. Spanish Franciscans (the Franciscans are a religious order in the Catholic Church) had established this college in Mexico to educate young indigenous men. Instruction in the College of Santa Cruz was trilingual: the men were taught in Spanish, Latin and Nahuatl. Nahuatl was the language spoken by the Aztecs and other Mesoamerican groups. Before the Spanish conquest, Nahuatl was written down in pictogylphs (stylized representations of objects and concepts, similar to Egyptian hieroglyphics). The Spaniard gave Nahuatl alphabetic form. The herbs in the Codex are all native to Mexico, and although the text is in Latin, all plant names are given in both Latin and Nahuatl.

The Codex represents a fascinating amalgamation of Nahua (the culture of those who spoke Nahuatl) and European medical theory. Possibly De la Cruz but certainly Badiano had some familiarity with European medical theory. There are references throughout the Codex to “humors,” to specific humors like yellow and black bile, and to purging “noxious” humors. Many of the ailments described in the text would have been familiar to Europeans. Europeans could certainly have read the text and fit almost all of the facts about the healing properties of plants into their own medical theory. However, the text also reflects Nahua views of health and healing, an aspect that was probably not apparent to European readers. In Nahua medicine, there were three forces (or souls) in the human body that had to be kept in balance for a person to stay healthy. These forces were the tonalli, the teyolia, and the ihiyotl. The tonalli was associated with the head and was responsible for the heat or vital force of a person. The teyolia was associated with the heart and was responsible for memory and intelligence. The ihiyotl was associated with the liver and was responsible for the emotions. Some diseases described in the Codex reflect Nahua rather than European concepts of health and disease. For example, “stupidity” was a disease in Nahua medicine. Because intelligence was connected to teyolia and to the heart, stupidity was a disease that could be treated medically with herbs to strengthen the heart. Further, many of the illustrations in the Codex incorporate traditional Nahuatl pictoglyphs, something a Nahuatl reader would have been able to interpret, but a European reader would not.

My final example is a seventeenth-century Peruvian Catholic cathedral in Cuzco, the former capital of the Incan empire.

The cathedral in Cusco (or Cuzco), Peru was begun in the 1550s and completed in 1654. The building looks very much like a large European church. Yet, as Carolyn Dean and Dana Leibsohn point out, the building was actually constructed by Andean workers. These workers used stones from a pre-conquest ruin outside of the city of Cuzco. Thus the stones had been cut and prepared long before the Spanish arrived in Peru. (The Incas completed numerous complex, large-scale building projects.  See the picture below of Machu Picchu.)  Further, although the design is European, the building techniques were indigenous. A contemporary Spanish sources describes the work as follows:

I saw this method used for the Cathedral of Cuzco which is under construction. Since the laborers who work on this job are Indians, the Spanish masons and architects let them use their own methods of doing the work, and in order to raise up the stones, they made the ramps mentioned above, piling earth next to the wall until the ramp was as high as the wall (quoted in Dean and Leibsohn, p. 15-16).

The building is thus a hybrid of European and indigenous technology and engineering.